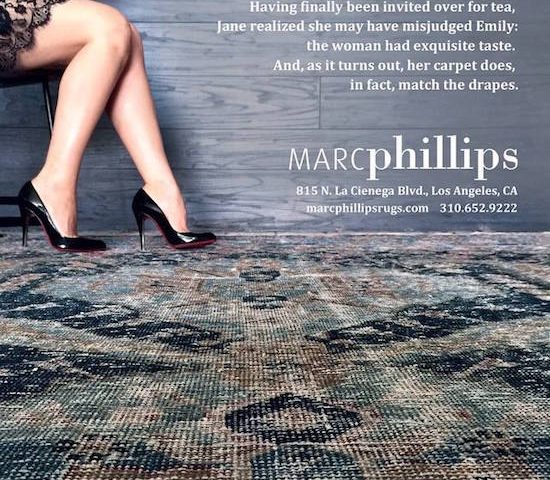 It’s a conundrum of sorts. How is it that a rug and carpet news and opinion source that now sells advertising space (For those not following along: It’s The Ruggist) would come to be writing about an advertisement from a rug company who wasn’t paying for placement? On one hand, the powers at be should be approaching and soliciting the would be advertiser extolling the merits and advantages of advertising on such a reputable site while, of course, simultaneously praising their wares for all of their glorious qualities. On the other hand, how could such a source claim to be reputable if it did not write about items worthy of praise in our industry? We cannot, and so without further adieu we present (free of charge) this advertisement from Marc Phillips. 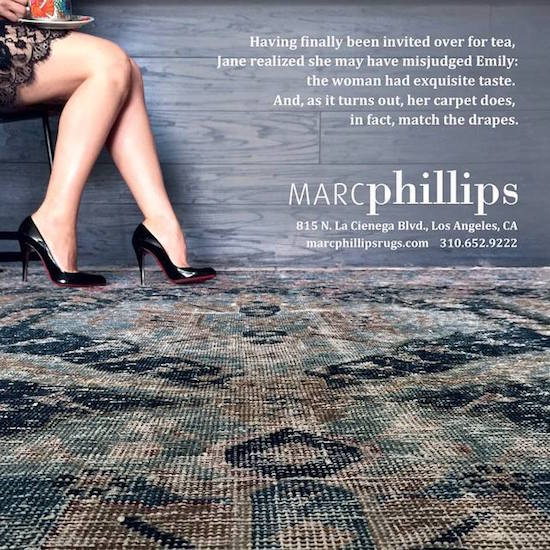 Advertisement for Marc Phillips as noticed by The Ruggist on Facebook.
Before you continue reading we advise that there may be brief discussion of exactly what those of you with minds in the gutter are thinking. This constitutes your warning. Read on at your own hyperbolical peril.
Simply put: It’s  a marvel of contemporary rug advertising that reads: ‘Having finally been invited over for tea, Jane realized she may have misjudged Emily: the woman had exquisite taste. And, as it turns out, her carpet does, in fact, match the drapes.’ Kudos. Hat’s off. And as the hip kids these days say: Slow. Clap. Fun, somewhat edgy, racy, and definitely bordering somewhere between irreverent and facetious, what’s not to love? Beyond the immediate reactions though, this advertisement truly is a diamond in the rough, standing apart from the staid, flat on, simple product shots that dominate so much of the advertising in our rug and carpet world. And that later sentiment, dear readers, is a problem for us as we attempt to target end consumers, not just rug dealers.
We, and I mean we as the entire rug industry low to high, cheapest (and I do mean cheap!) to most expensive (those carpets that are rightly expensive) generally do not receive a lot of respect from most shelter publications. Sure they court rug companies for advertising dollars – because that is what you do when you sell advertising – but at the end of the day most shelter publications don’t really care about rugs and carpets. Why? Rugs don’t sell magazines, and by extension advertising. But do you know what does? Sex. Sex sells. Oh, so do other things, but if you really want to get featured editorial consideration in a shelter publication you had best have some fantastic photography of a kitchen space (showing several brand name appliances so that the publication can try and sell said brands advertising space), or some lively bright family filled energetic space, or an amazing view, or an amazing building, or be the (potentially) lacklustre and simply banal home of a famous celebrity. Oh, and if there are rugs in the space that is great, but they are likely to get cropped out of the photo in favour of something more interesting (read: trendy and validating to consumers) such as a fake sign listing subway stops in a city the homeowner has never been to purchased from Restoration Pottery Pier and Barrel. Certainly there are fantastic detail oriented shelter publications that publish creative and original work, but for the majority, that’s how you get into most (not all, for the sake of all things good, I am not saying all) shelter publications.
So how do we combat this mediocrity and homogenization? We (again as a whole) produce an endless series of advertisements that are, in varying combinations: staid, boring, unoriginal, lacking context, unsexy, so on and so forth with more negative adjectives until we reach the worst offending ‘tricks’: stock photography and poorly executed graphics skills (Bad photoshop, bad!). It’s like we aren’t even trying to be taken as a serious and, as we will all agree, integral component of beautiful interiors. This is not to say that being a serious contender requires a three button suit, starched shirt, and tasteful tie, but it does require us to produce advertising that piques emotional interest. Having said that, we now return, interest piqued to the advertisement from Marc Phillips.

‘On one side of my mouth the corner turned slowly and sharply upward, the other stretched elongated toward the lateral as a coy smirk appeared on my face. I then laughed aloud.’

We can presume that was and is the intention of this advertisement. By laughing and actually noticing and doing more than just flipping or scrolling past another advert for another rug, the engaged reader takes a moment to ponder the content. To analyze, to digest intellectually, to connect with the brand. In  short, it causes the reader to want to want either that specific carpet, or another carpet from those fun people at Marc Phillips. It’s an emotional connection and fashion is solely about emotion and feeling good about the way things look.

The advert is so much more though. But in order to spare you from reading onward for a few more hours and in the interest of practising brevity we (The royal we!) shall list some things to consider about this advertisement:

Messaging ladies and gentlemen. Messaging. Advertisements convey messages to readers and viewers in hopes of turning them into customers. I’m not saying that the aforementioned staid flat shot rug advertisements are passé, but I am saying that if you want you want to be noticed, you need to stand out in a crowd. How do you do that? It varies, but I suggest finding a way that is authentic (whatever that means) to you and your brand.

Editor’s Note: The Ruggist contacted Marc Phillips back in late May or early June when we first saw this advertisement but as of 13 August 2015 we had received no response. Also: The Ruggist is most certainly not a shelter publication, as if there was any confusion.

Update: After posting this article to Facebook we noticed the automatic cropping of the image by Facebook left an image still well composed. Whether intentional or otherwise we acknowledge this furthers our love of this advert.