Welcome to the first installment, of…, err, inaugural ‘Over Coffee’ interview. This is a new freeform feature on The Ruggist where we talk with luminaries, freshmen, legends, and otherwise from the world of rugs. Not necessarily only about rugs and carpets, Over Coffee’s only set premise is in the name. By introducing another more moderate passion of mine – coffee – it is my hope these conversations will be more casual, wide ranging, and interesting than an old school interview. I’m a casual guy, and I’d like to share a bit of that informality with you. So, to start us off I have asked my dear friend Amy Helfand – who is a real friend, not one just in that marketing terminology way. I’ve asked Amy to be my first…interviewee… as we talk at ‘The House of Love’.

Location: The kitchen of Amy Helfand’s Home, Red Hook, Brooklyn, New York.
Time and Date: 6:25 AM, Monday, 12 September 2016
Note Bene: I was staying with Amy and this interview was conducted in pajamas.

Amy Helfand (AH): So how are we going to do this interview thing? What’s it called again, ‘Over Breakfast? Over Coffee?’

The Ruggist (MC): ‘Over Breakfast!’ Remember how I wanted it to be all themed the same. The slight informality of it.

MC: The definite informality of it. Well ‘Over Breakfast’ was the working title. I ended up using ‘Over Coffee’ because frankly that concept is just easier to schedule and make work.

AH: Oh yeah. Don’t you have more of these lined up for when you’re in Nepal?

MC: I do, but that’s not what we’re talking about right now. You know if we get off topic we won’t get this done. Today. Today, it is all about you! At least until the interview is over. So tell me a bit about ‘Amy Helfand‘ the artist. The mom. The rug designer. The hostess of ‘The House of Love‘. That sounds somewhat dirty? Is it as dirty as your sink?

<MC clears some dirty dishes left out from both a late evening family meal of Shakshuka and some cocktails the night before. He then proceeds to make coffee for AH and himself in a Chemex.>

AH: Hey! You stayed up for a few drinks with us. It’s not just my fault.

MC: I know. I tease. I also love that you have a Chemex. This is my favourite way to make coffee, but I pretty much only use it for afternoon coffee. This is a morning treat!

AH: Mike (her husband and fellow artist Michael Miller) loves that thing. And since he makes the coffee usually, I drink it.

MC: I love a decent coffee. God(s)! The swill people will tolerate. It’s like they don’t have taste buds.

MC: Just like rugs? Ahhh. See what I did? The hideous rugs people will tolerate. It’s like they don’t have eyes.

<MC pours coffee for AH and himself and adds milk before passing the cups.>

MC: Sorry I didn’t warm the milk like Mike does. So. Tell me what you think about your rugs? What inspires you? What do you want to achieve from designing rugs? Tell me about the artist, the artist that makes rugs.

AH: Are you going to let me finish?

AH: I’m a sculptor. Here, this is one of my pieces from University. <Amy turns her laptop so I can see.> These hanging balls are made of resin. But that was then, now I tend to work a lot more with wire, or wire like materials that I can bend and position.

MC: But the wire sculptures… . Like those red sculptures you made for your stand at ICFF?

AH: Exactly. But I didn’t just make them for ICFF. The sculptures form the basis for my rug designs. I photograph the sculptures then begin playing with the images in photoshop examining the play between positive and negative space. Seeing the shapes both for what they are, and what they can be.

MC: Sort of like a carpet graph? Just the outlines of the design.

MC: I must say, I really like the new carpets you first showed back at ICFF, especially Tiffany. I love that the colour was inspired by that well loved leather bench at Tiffany’s.

AH: Well they are mostly the same ones I’m showing at the show this weekend. [Amy is referring to The New York International Carpet Show (NYICS) which ran 11-13 September 2016.]

MC: Yes, but this is a different venue and the audience is much different. If you ever expect to attract rug dealers you have to get out in front of rug dealers. Either at a show or hounding them in their own showrooms.

AH: Do you think people like my rugs? I wonder if my aesthetic is right for people. Is it too colourful?

MC: You’re such the doubting artist. You have to accept the compliments.

AH: Thats’s easy for you to say. You’re The Ruggist!

MC: Oh now you know that’s not true. The Ruggist is the (somewhat) polished version of me. Michael on the other hand is a neurotic mess. But anyway, moving on and to answer your question… . I for one never think you can have too much colour. And besides you did make that one silver runner for people who want to see that sort of thing. Honestly though, if you are going to find success, you fill find it by designing what’s in your heart, not by following trends.

AH: But trends sell, don’t they?

MC: Yes, but it’s about finding the balance between ‘Art’ and ‘Design’ and ‘Saleability’ without being a sell out. This is of course very hard. Take for instance The Ruggist. How can I keep writing and being an opinionated ass while trying to sell advertising? Once you have advertisers, they come knocking with all kinds of demands. I’m not saying it is bad, but it changes the dynamic, just like the difference between making art and designing a desirable carpet.

AH: Well I want my carpets to be desirable and artistic.

MC: I think they already are. But the market is challenging and it’s about finding likeminded people, that is dealers, who care more about carpets as art as opposed to carpets as a commodity. There are more than plenty of the latter, the former  – like your carpets – are harder to find. Probably harder to sell as well given the fickleness of trends and consumers.

AH: Yeah, but what’s the difference in the end? People just see a rug and they like it or not.

MC: Quality and integrity. You’re having your carpets made by some of the best makers in Nepal. They are well made and that is imperative if your carpet is going to be truly more than a design… to transcend purely decorative to art I guess.

AH: You guess? I thought you were some sort of expert?

MC: Some sort of something that is for sure. Sorry, I guess I’m getting hungry. Can we make some food?

AH: Sure. What do you want to make? We can make breakfast sandwiches on english muffins with fried eggs and kimchi.

MC: See this is why I love staying with you. Fresh eggs from your backyard chicken coop served with this <looks at mysteriously sourced jar of kimchi> kimchi of dubious origin. This is as hipster and Brooklyn as you can get. You know that right?

AH: We were here long before Red Hook was hip. Uh! All the construction is ruining my view.

<I begin cooking backyard fresh eggs from chickens fed an all natural diet sourced, reflective of the times, from Amazon, while Amy toasts english muffins, mayo, et cetera for our sandwiches. We assemble and I try my first bite.>

MC: Hmmm. This is pretty good. I like the heat!!

AH: And it’s good for your digestion because it is fermented.

MC: Thanks mom! Ahh. Look at the time, we should start getting ready to get over to the shows.

AH: But we’ve barely talked about my rugs, or the House of Love.

MC: I know, but that’s the idea of ‘Over Coffee’… it can be anything. But seriously, don’t worry about it. Worry about the show today. I’m soooooo glad the booth came together for you the other night. What a challenge that was!! Could it have been any hotter in there for setup? It looks great by the way!!!

AH: Well if it wasn’t for you and Mike helping me set-up I don’t know what I would of done.

MC: I’m just glad it all came together in the end. It really does look great and so do the rugs. Besides, compared to some of the other presentations, yours looks amazing.

AH: You’re just saying that because I am letting you stay with me.

MC: No, it’s because it is true…. and because you let me stay here.

<I smirk before heading upstairs to take a shower and get ready to head to both the NYICS and The Rug Show.>

AH: Alright… let’s do this! 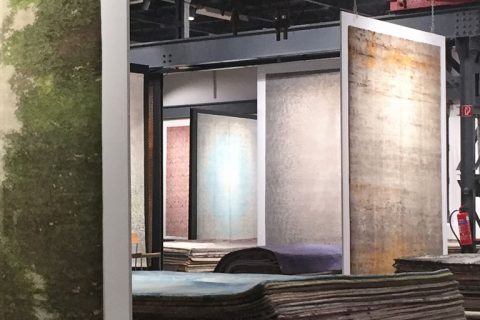