Serendipity is a ‘fortunate happenstance’ or ‘pleasant surprise’; the term was coined by Horace Walpole in 1754. In a letter he wrote to a friend, Walpole explained an unexpected discovery he had made by reference to a Persian fairy tale, The Three Princes of Serendip. The princes, he told his correspondent, were ‘always making discoveries, by accidents and sagacity, of things which they were not in quest of.’, at least according to Wikipedia. And so it is quite serendipitous that the vast and mostly borderless internet happened to introduce me to the Ragamuf. What the heck is a ‘Ragamuf’ you ask? Well, let me tell you.

A Ragamuf is a stretchy chair rug, which fits chairs of different shapes and sizes, instantly transforming it from ordinary to extraordinary with no sense of hyperbole. Every single Ragamuf is unique, owing to the discretion and tastes of its maker who gets to personally pick the design, colours, and shapes they wish to use. As such, not only are Ragamufs surprisingly gorgeous, but also meaningful to the persons who make them. Moreover, for those who buy them, they obtain a unique and versatile chair cover guaranteed to spark interest and conversation for years to come.

Made from reclaimed excess fabric from the textile industry in Turkey, the fabric is processed into strips which are then handknotted to a stretchy net-like base fabric resembling a relatively course fish net. The concept comes from Finnish designer Tuula Pöyhönen who came up with the idea for a chair rug in the summer of 2015 while living in Scotland. As an artist-in-residence, the designer found herself thinking of her sons playing on an old faded sofa in her apartment and while paying a visit to a draper’s shop stumbled upon a roll of flexible fishnet. By combining her expertise in carpets, textiles and sportswear materials she created the concept of a chair rug and in early 2016, the first prototype was made in Morocco.

Concurrently, the owner and founder of what has become Ragamuf, another Finn by the name Martta Leskelä was living in Turkey. Inspired by her past humanitarian work with Finn Church Aid and in light of the crisis in Syria, she set out to provide employment for refugee women residing in Turkey. The paths of Leskelä and Pöyhönen eventually crossed in March 2016 and the ingenious chair rug Tuula had thought up was immediately to Martta’s liking: It was a handcrafted product, which required plenty of work-hours and workers to produce. Thus, not only was the chair rug an innovative idea in itself, but also a perfect product for her project. As Leskelä and Pöyhönen brought together their ideas, skills, and passion, Ragamuf was born.

Working in collaboration with a Turkish humanitarian aid organization, Ragamuf employs Syrian refugee women currently residing in Turkey. As with many other parts of the world, women are often the most vulnerable members of society, and as such, Ragamuf seeks to empower women who are currently living in a poor financial situation with a desire to lead independent and comfortable lives. Furthermore, this partnership helps to ensure the women are paid fair and lawful wages.

Ragamuf is a very new product not yet even at market. It was was launched on 17 January 2017 via an Indiegogo crowdfunding campaign. At the time this article was published the campaign had exceeded its goal with three (3) days remaining for those seeking pre-orders. Ragamuf intends to use the funds raised during the campaign to open an online store in 2017, thus allowing for increased opportunities for as many refugee women as possible. Ragamuf will only be sold online, which enables reasonable prices while giving the greatest number of people an opportunity to purchase one.

Unfortunate as the Syrian refugee crisis may be, often all we can do is make best of the situation. These are people displaced not on their own volition but by the will of the powers at be. Our human ability to cope is inspiring and when products that are beautiful, charming, unique, individualistic, and freaking awesome, also do good, they deserve to be supported. 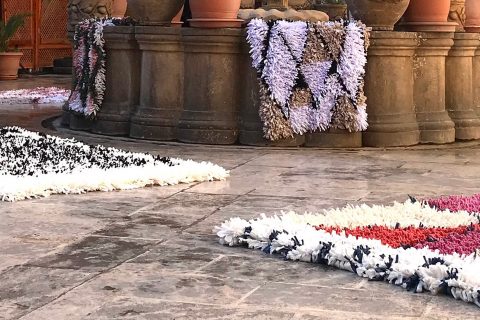