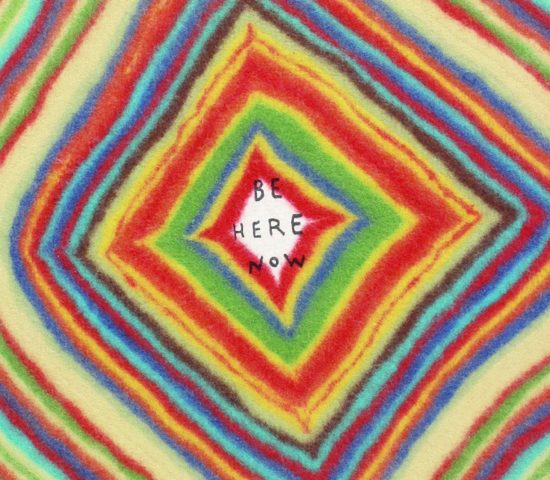 Amongst his various talents as an artist and designer Dan Golden makes Shiddy cartoons. No, seriously he does! Contrary to the expectations (low or otherwise) you may have of his work given the explicitly intentional way the cartoon is named as to be implicit toward the quality of something, the work is quite an exceptional commentary on contemporary society.  It’s also highly irreverent which (as you should guess) draws me to it like some American simile involving musca domestica and excrement. Mr. Golden (please call him Dan, Mr. Golden is his father) and I met in 2010 when we both had carpet collections at The Stephanie Odegard Collection; his involved drugs in abstraction, mine jokes about hookers. Add in an Indian dinner party involving my dear friend Victoria (a hooker of her own renown) with her aversion to eating lamb, and you can see how the jokes went from mediocre to Baaa-aaa-aaa-aaa-aaad! It’s under these circumstances that Dan and I became friends, and it is with similar contempt for haughty thought and a touch of hyperbole that I introduce you to Dan Golden: Carpet Designer Extraordinaire! 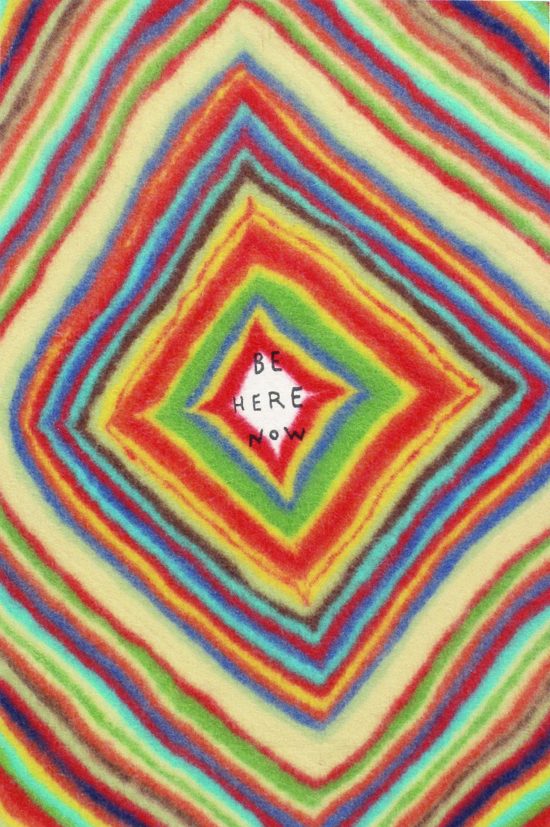 “Be Here Now” from The New Age Rug Collection by Dan Golden at The Stephanie Odegard Collection
Though this is not the first rug of Dan’s I ever saw, nor is it the one that inspired me to share his talent with you, it is the one whose message we should all be mindful of. The world is a truly amazing place and so often we neglect what is immediately before us in favour of something better and ever illusive.
It’s a hippy-dippy feel good message that was inspired by Dan’s bohemian upbringing during the 1970s. “Living in Mexico and on communes, the people I knew, my parents, and the general “vibe” of the time. I wanted to take all of these elements and transform them into designs which bring positive energy, warmth and safety into people’s homes and lives. I see these rug designs as encouraging mantras and reminders for us all – to create safe spaces, be in the present and spread good vibes.” says Dan. Good vibes, eh? And to think he passed up the opportunity to have the “Good Fibrations Collection” – “Wocka Wocka”, but I digress. Made of felted wool in colours straight from some vivid TECHNICOLOUR dream, the carpets of the “New Age Rug Collection” are not only aesthetically pleasing, but they bring an element of art and deeper meaning to rugs.
Of course this sentimentality toward art and rugs is nothing new. Our industry proclaims the merits of rugs as art with near reckless abandon, but how much of what is made is truly art in the ars gratia artis sense versus the decorative want-to-sell-it-in-large-quantities kind of way? Now do not think I am disparaging the later, I am merely suggesting that there is a strong distinction betwixt the two and that for a carpet to be categorized as the former it must provoke thought beyond “this would look good in my living room”. Perhaps it best then that we now examine another beautiful carpet as we debate the merits of the two. 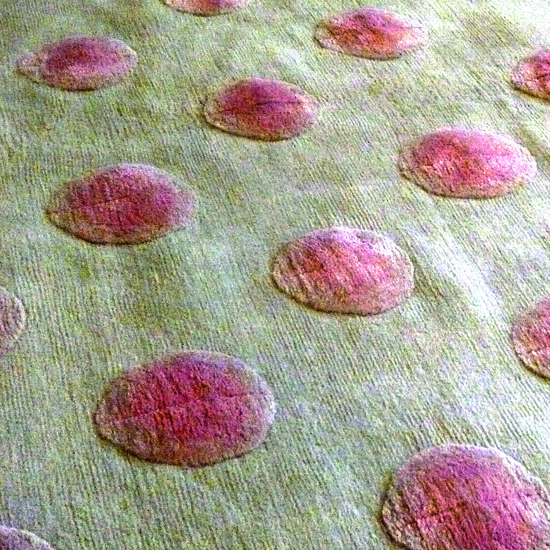 Detail image of “Calm” from The Meds Collection by Dan Golden at The Stephanie Odegard Collection.
Now this is a carpet that could look great in a living room!! It’s highly decorative and combines a variety of things that sell rugs: 1) It’s (primarily) beige! 2) It has other soothing and calm colours in limited doses. 3) It’s polka dot like patterning never really goes out of style, nor does it distract from the space. Overall it is a perfectly serviceable decorative carpet well suited to many interiors. How’s that for a bland politically correct and polite endorsement? I might as well have said “It looks Okay”. In stark contrast to that intentionally and slightly boorish description and in my not so humble opinion, this carpet is also the epitome of what superior design can be. “Calm” is a not so abstract as you might think interpretation of the pharmaceutical Paxil and now thusly armed with this knowledge I think we all know why I like this rug. Frankly how could you not? It simultaneously exists both as decorative carpet and as self referential commentary on societies’ need/want (I’m uncertain as to which) to calm themselves by means chemical or otherwise. Mwah! It’s perfection, if such a thing exists. Furthermore, if we briefly entertain some contrarian opinion espousing this carpet as nothing more than kitschy contemporary rubbish that fails to pay homage to the great and time honoured craft of carpet weaving, we are then forced to question “What is a permissible source of inspiration?”

Inspiration comes from all sources and should not great carpets of our era actually be inspired by our own time and not solely some reflective (and rehashed) longing for the past? Should they not embody our zeitgeist? I can nary think of anyone who would discount the cultural value of a Soviet Era Afghan War Rug, yet because of circumstances different the raucous debate even a tenuous comparison would bring is worthy of note. Art (if that is indeed what we are actually making) is meant to provoke after all.  So let the provocation begin!!

We’re a drug addicted society that unironically permits and endorses a virtually unlimited smorgasbord of mind and body altering compounds so long as they are physician and by extension societally approved. Yet, at the same time we inhumanly punish those who, whilst doing no harm to others, choose to alter their minds via dubiously unapproved drugs such as marijuana. The logic fails me because none exists. But! There are those in our society who see through the cloud of smoke if you will, and are working to change that. No fewer than one (1) such person (the forthcoming client) also loves irreverent humour and rugs. 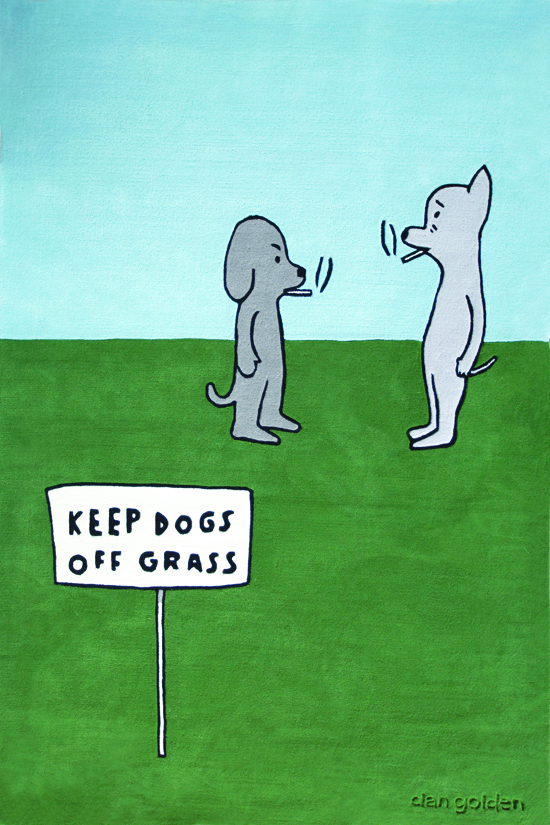 “Keep Dogs Off Grass” by Dan Golden – From his Self Produced 2007 Collection.
This is the carpet that brought us to be talking about Dan and I can almost hear what you are all saying. “It’s naive.” “It’s juvenile.” “It’s a simple cartoon.” So on an so forth. Indubitably this in indeed the case, but as we are in the midst of a discussion about Dan and his art, should we not strive to understand the provenance of this piece?  To examine it for more than its superficiality? On its surface all of the things you may be thinking are patently true, especially so of the version of this rug design as it was originally crafted in 2007, but what about the one I saw on Instagram made by Fort Street Studio as shown below?

Keep Dogs Off Grass rug order for client in Los Angeles. Just arrived at Fort Street Studio and shipping out on Monday.
A photo posted by Dan Golden (@dangoldenstudio) on Mar 28, 2015 at 9:26am PDT

Fort Street Studio. Let that sink in for a moment and I’ll let Dan explain further: “So yeah, ‘Keep Dogs Off Grass’ is a rug that I was commissioned to make for a serious mover and shaker lawyer in California who works primarily with marijuana legalization.  He saw the original rug, loved it, and contacted me about making one for him. I wanted it to be the best quality it could be [and seeing as the original maker is now defunct] I contacted some friends at Fort Street Studio to see if they would make it for me. They did obviously, and it looks great.” This where the art if you will of this carpet comes in to play and it’s all in context. Typically a rug of this nature would be crafted made of the cheapest wool possible, perhaps even a **gasp** synthetic fibre, tufted definitely tufted, and sold at the lowest price possible. Likely at one of those going-out-of-business-hang-this-rug-by-the-side-of-the-road kind of places. Yeah, you know what I mean. Yet not in this case. In its stead we are presented with a carpet whose design has transcended its genre, its station, to be made by one of our industry’s premier makers. The dichotomy alone is enough to warrant praise, and then we have to think about the juxtaposition of this carpet in a lawyer’s office. Oh, if you’ll allow the pun, it’s truly Golden. Perhaps when examining rugs as art we have to forego the solitary merits of the piece and think of the way the rug completes the space. Not solely decoratively of course, but in some Duchampian way that calls into question intent, purpose, and environment. Now you’re left to wonder if I’m making some thinly veiled urinal comparison. Well, just like the number of licks it takes to get to the centre of a Tootsie Roll Pop, the world may never know. 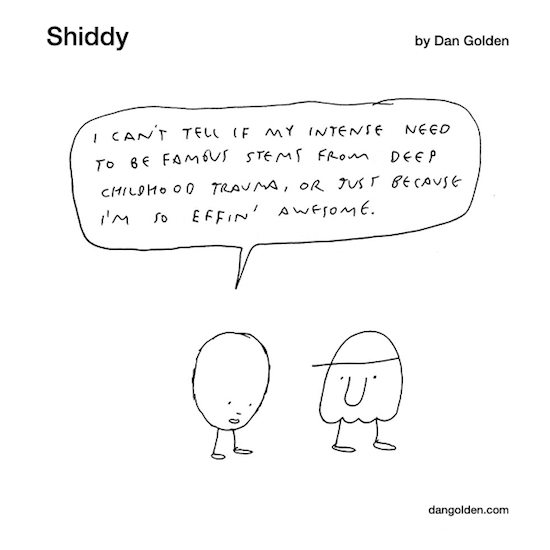 Dan is currently working on designs for several new rug collections, with hopes to either self-produce, or possibly collaborate with a rug company again (like he did with Odegard). As  Dan explains: “I enjoy the opportunity to explore interesting ideas (whether humorous, abstract, conceptual, etc.) through this ostensibly traditional medium of rugs –  I see them kind of as paintings, without having to stretch and gesso a bunch of canvases. I enjoy the opportunity to collaborate with other people in the process – from the craftsmen to the retailer to the customer – it’s satisfies both my creative and social needs.” End shameless plug.

Dan is a great distiller of truths. His ability to convey his artistic message in a neat and tidy and concise manner makes it that much more admirable and frankly well done. Rugs that exist both as decorative pieces and as social commentary are not as common as they should be given our propensity to call what we do art, but that is not to say the future cannot be that way. If great carpets are to be made as Fine versus Decorative Art (both equal, noble, and admirable aspirations) or even both, we must be willing to accept that critique, dialog, love, hate, emotion. and all the complex passions that capital “A” Art is meant to inspire will follow and enrich our experience.

Now, before we go, I present another of Dan’s designs without my own verbose commentary, allowing you to again wonder, what is The Ruggist implying with this? Thank you for reading. So Long. Farewell. Auf Wiedersehen. Good-bye. Adieu, to you, and you, and you…! 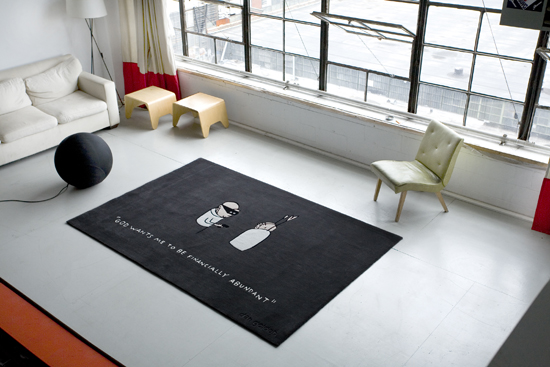 “God Wants Me To Be Financially Abundant” – Dan Golden 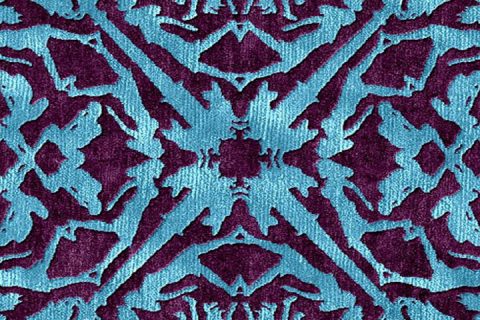 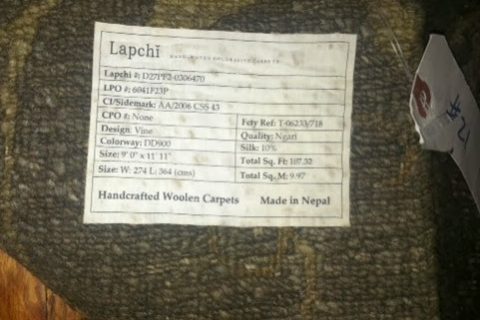 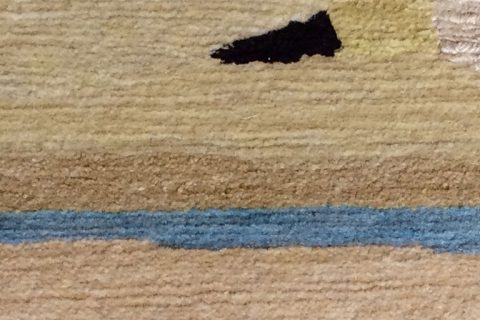