Earlier this summer The Ruggist featured a glowing review of the Fatboy Picnic Lounge; lavishing praise and adulation upon it as the hot summer sun beat down on us, we extolled the virtuous wonder of that amazing blanket for the beach. But that was summer, and with the sun now resting much lower in the sky, I had assumed the lounge had been rolled up and packed away for the last time awaiting next year and another season of beach going. That was until I spoke with the delightfully cheerful Paige Albright of Paige Albright Orientals in Birmingham, Alabama.

‘Designers love them’ Ms. Albright begins, referring to Fatboy’s other rug product, the Non-Flying Carpet. ‘They don’t button them together [as the product is designed to do], but they love the style and versatility, and when they get dirty you can just four oh nine them.’ I pause her for a moment wondering what kind of regional vernacular I am dealing with before I realize she means Formula 409 ® the cleaner, and not something else. She then continues ‘They are a clever product that is fun and perfectly suited for going to the beach, football games, little league games, and of course tailgating!’ I next inquire as one would after hearing the later part of that sentence by asking: tailgating? ‘Oh yes!’ Paige states ‘One client bought one and took it tailgating, and the next thing you know everyone has to have one. Tailgating is very competitive!’

Paige also tells me that while her business is primarily in older and antique traditionally styled carpets she does significant business in indoor/outdoor rugs – specifically mentioning those from Capel and Dash and Albert. Her clients love the durability and ease of cleaning afforded by indoor/outdoor rated carpets, and when paired with the fun, fresh, and modern interpretation of traditional ‘Persian’ elements, it’s easy to see how the Fatboy products fit into her offerings. ‘Oh and the Picnic Lounge, that is just crazy!’ she says enthusiastically ‘All of those little motifs are just so interesting!’ Obviously I could not agree more, but having your product described as ‘crazy’ is not always seen as an endorsement, unless of course you happen to be Studio Kluif, the design firm that created the Picnic Lounge for Fatboy.

‘The idea for the Picnic Lounge came from Alex [Bergman, Owner of Fatboy]’ Paul Roeters the Creative Director of Studio Kluif tells me as we’re discussing the lounge. ‘He had gone to the beach and as happens, sand got everywhere on his blanket. He then came to me and asked us to design a ‘oversized beach blanket’. So we did.’ Mr. Roeters states before adding ‘Of course everything about the Fatboy brand is oversized and exaggerated.’
The relationship between Studio Kluif and Fatboy is one of a long collaborative friendship that began when Studio Kluif was hired to create a new brand identity for what was then the young company Fatboy. Alex Bergman had acquired the rights to make their large and now iconic beanbag, but sales were, how does one say, not hitting expectations. Fortunately for him, Paul and the staff at Studio Kluif were more than up to the task. ‘I started work for Oilily [the stylish Dutch retailer] fresh from University and was thrown right into deep water.’ Paul begins. ‘My background was in Graphic Design and here I was designing fabric for clothing. I had to learn a lot and I had to learn quickly. ‘ Paul worked at Oilily for four (4) years before he started his own firm that is best described as a multi-disciplinary design house. One with no small degree of panache if you’re to look at their body of work.

As we further discussed his work for Fatboy he regaled me with the origin story of the ‘Cooper Cappie‘ for their ‘Edison the Petit‘ lamp which in short involves imagery of famed British [actually Welsh for those concerned] prop comedian and magician Tommy Cooper (renown for wearing a fez), too much whisky, and lamp shades as hats. The rest, as is said, is history but you can see now why ‘crazy’ is an appropriate description for the work behind the Picnic Lounge.

‘Do you have any background in rugs?’ I ask Paul, anxious to hear what may come next. ‘No. None. After Alex asked us to design the lounge I came up with the idea to use the image of a classical Persian carpet.’ Paul and his staff then set about to create the design that would eventually become the Picnic Lounge, first by finding a picture of what I would call a generic Persian carpet, then by supplanting traditional elements with playful modern ones including self referential Fatboy branded items. Paul concludes, ‘It was a collaborative process here at the Studio. I am the Creative Director so I am always coming and going, checking in on various projects. I don’t remember how many versions we went through as this was about three (3) years ago, but in the end this is what we created.’ And at the end (of this), I’m glad they did. 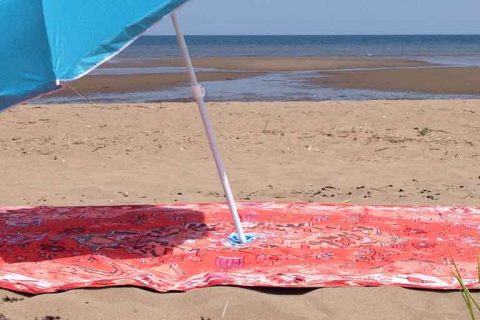