Launched in January 2017, the Ragamuf chair cover – featured by The Ruggist on 14 February 2017 –  was a critical and financial success with the original Ragamuf line selling out and finding homes in twenty (20) countries worldwide. Initially funded by an Indiegogo campaign, the goal of Ragamuf’s founder Martta Leskelä was to provide meaningful employment to female Syrian refugees living in Turkey. She succeeded in this regard via Ragamuf, but sought to provide a more lasting means of income for those women. This his how Ragmate – launched on 7 March 2018 – was born.

While the Ragmate Collection of cushion (toss pillow) covers, throw rugs, floor rugs and wall rugs possesses the same endearing shaggy texture as the original Ragamuf, the technique of manufacture differs. Instead of being handknotted to a stretchy substrate – as was the process for the Ragamufs designed by Finnish designer Tuula Pöyhönen – Ragmates are instead knotted to a stable net, which is a ‘very old and common technique, at least in Finland’ according to Leskelä. Utilizing waste textiles from the fashion industry, Ragmate is the realization of the long-held dream of Leskelä and the result of her endeavours to help those in need. ‘I want to use my skills and expertise so that as many female refugees as possible will have the chance to improve their condition to survive in their lives.’ Each individual and unique Ragmate (no two are the same) bears attribution for the Syrian refugee who handknotted it and in some instances even offers inspirational thoughts from the same.

‘Life is brilliant, like the brightness of color. We should be optimistic just like the colors that inspire hope in us, and we must work hard and enjoy our work. Life is beautiful, and the hardships of life give us hope and the will to survive. I ask God to bestow his blessings upon me, upon my beloved ones, upon the people I have met, and upon the people of this beautiful country.’ – Rağda Seyyid

The new collection draws inspiration from a wide range of sources, from medieval times to the modern day, from functionality to art, from fabric scrap to treasured adornment for the home. As all of the items in the collection are handmade and labour intensive, the production creates significant employment for the twenty-three (23) Syrian women currently employed by Ragmate and fulfills the business mission of Leskelä which is to help the most disadvantaged lead a more independent and happier life.

‘Love and respect toward people and nature, vision, expertise, quality and excellent customer service, have been the guiding principles of the company.’ according to the Ragmate website which adds ‘From this point forward, Ragmate’s story will be told and narrated by the customers and makers of Ragmate products.’ Taking a few moments to read the inspirational words of the refugees who make the Ragmate products provides a window into the indomitable human spirit. To contrast the messages of hope and love, of perseverance, against images of despair and destruction, is to remind each us of the role we play in this unfathomably large world. As for the stories of those who purchased an original Ragamuf or those who will purchase one of the new Ragmate products… . Let us just say that by this commentators estimation, as the invited guest of the Italian brand Falconeri, the forthcoming exhibition of Ragmate during the Salone del Mobile in Milan this April is likely to provide the brand ample narrative.

[EDITOR’S NOTE: The story was edited on 14 March 2018 to correct errors in image captioning and in the technical description of the Ragmate production method.] 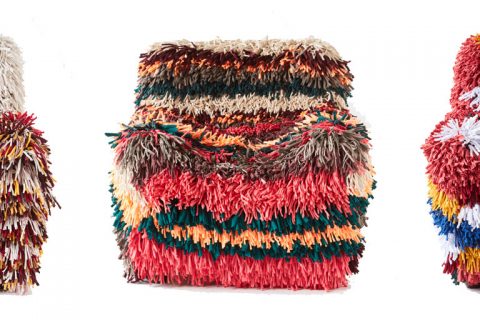